A waterspout is basically a tornado over the water.  Waterspouts usually occur in tropical areas.  Two nights ago was a stormy night at Green Turtle Cay, Abacos (26°45’7.1″N 77°19’4.2″W), and that’s when we saw one.  You could see lots of stuff flying around in it and we could see the waterspout spinning. Suddenly the temperature dropped about 15 degrees.

The waterspout started getting closer and looked like it was coming over the land toward us.  Our boat neighbor Dave and his crew, Dennis, was with us at the time.  Dave said, “Let’s get in my boat.  Now.”   We moved on to his boat which was heavier and more stable. 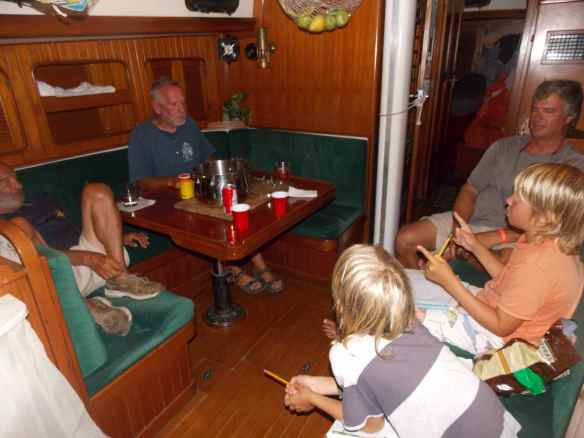 Dave is on the left and Dennis is seated next to him. This picture was taken inside their boat.

Waterspout we saw off the back of our boat on Green Turtle Cay, Abacos, Bahamas.

After a while the waterspout dissipated and we went back to our boat.  It was very exciting to see a water spout up close.

1 thought on “Waterspout at Green Turtle, Abacos by Cole”