We arrived in Beaufort, NC on June 23rd and took a slip at Town Creek Marina.  When we returned to Florida we listed our boat for sale. A couple had seen our listing for Truansea and wanted to take a look at her before we arrived in the Chesapeake.

On the way up to Beaufort I noticed a few drips of diesel coming from a couple of compression washers on the fuel line that needed replacing.  Luckily the owner of the marina was working on his day off and I was able to buy the parts I needed.  After replacing the washers and bleeding the fuel lines, I noticed some new corrosion on the exhaust mixing elbow.  This could be a significant problem as I had learned from several other cruisers and although I had inspected the elbow before we left on this trip, we have also put 300 more hours on the engine.  Once again I was in luck, the marina had the elbow I needed in stock and even let me use their workbench to wrench the parts together.  The last thing I wanted was an exhaust leak with prospective buyers arriving the next day. 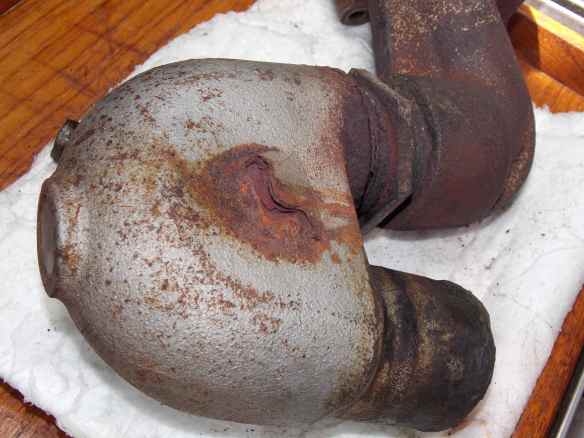 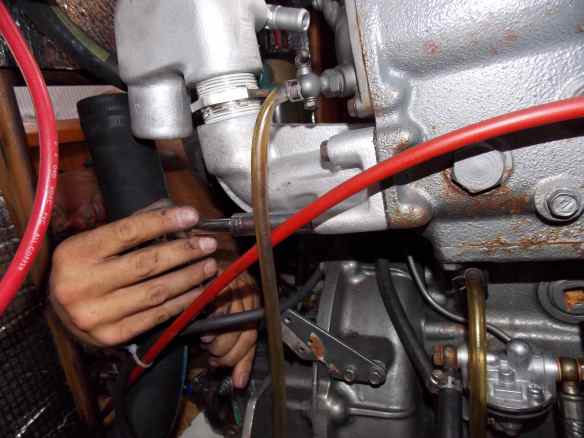 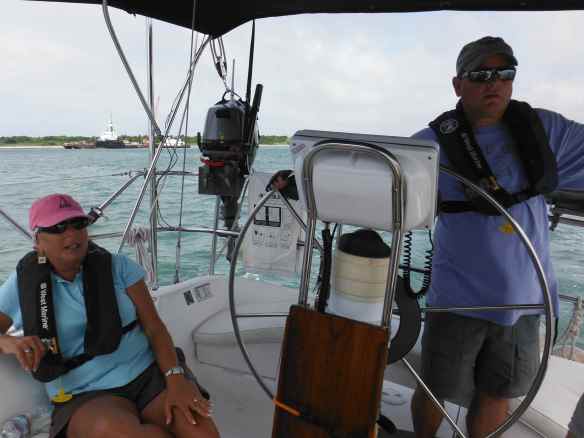 John and Marty enjoying a sail on Truansea.

We took our guests, John and Marty, for a sail the next day.  With perfect wind at 15 knots, Truansea was sailing in the groove.  John brought a couple of harmonicas along for the boys and home schooled us all on the blues.  As soon as the weather lets up we will head north for a survey.

As is usual at a marina, we started meeting other sailors as we walked the docks.  At the end of one of the piers floated the classic boats a Pearson and a Swan 36.  We met their owners Mike and Eric.  Mike also owns a houseboat at the marina where he lives but takes his Pearson out sailing on the weekends or whenever the opportunity/wind permits. 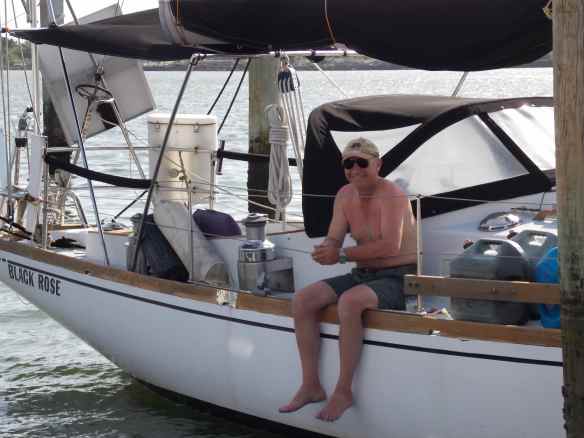 Eric who is from Halfway, Oregon found his Swan on EBay in the Grand Cayman Islands.  He bought the boat there and sailed her back to the US. His advice for purchasing a boat in another country is to find a surveyor who can take a preliminary look at the boat to make sure the boat is being fairly represented before purchasing the ticket to see for yourself.  He was making repairs (as are all boaters) to his boomvang then heading out the Beaufort inlet to the Atlantic for an outside crossing to Charleston SC.  Mike was going to accompany him south and they were provisioning the boat while they also wait for a break in the weather.

Since the winds have blowing anywhere between 20 and 35 knots for the last several days, we decided to rent a car and visit the North Carolina Aquarium at Pine Knoll Shores and also see Fort Macon.  The fort was built after the war of 1812 proved how vulnerable the nations coasts were to attack.  The Confederate army briefly held the fort during the Civil War before being recaptured by Union forces after 11 hours of constant shelling. 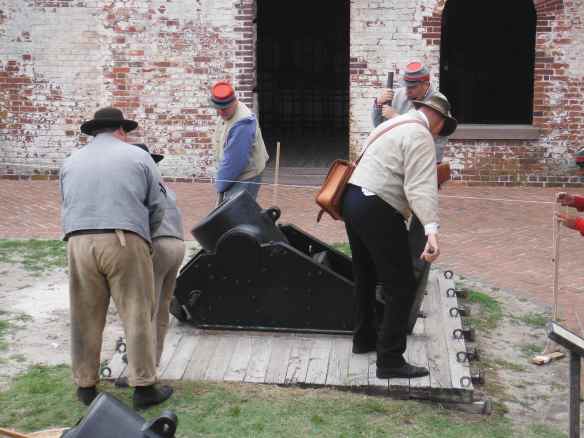 Preparing to fire a mortar. 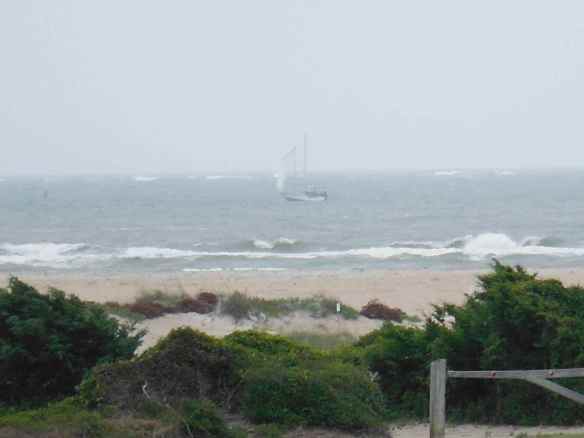 A sailboat that caught our eye seen from Fort Macon coming into Beaufort is S/V Troll.

The town of Beaufort is rich in maritime history.  Blackbeard’s ship, the Queen Anne’s Revenge was recently rediscovered where she sank after running aground outside Beaufort inlet. Artifacts from the wreck can be seen at the Maritime Museum in Beaufort. 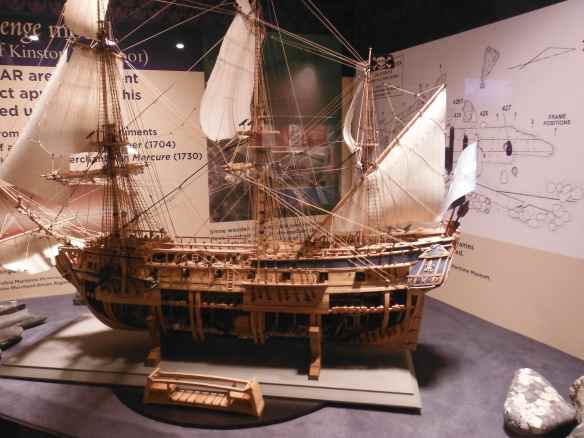 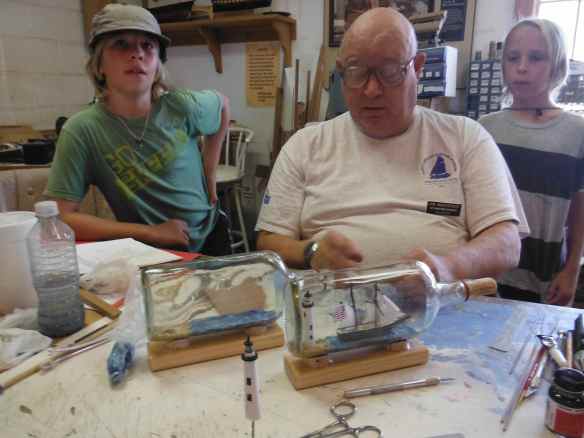 The man who puts the ship in the bottle! 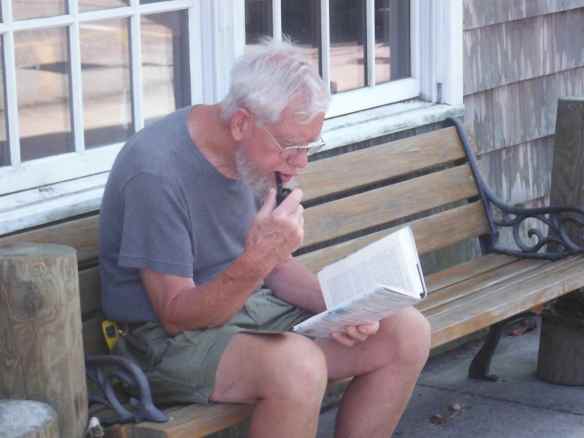 Taking a break from boatbuilding. There is no shortage of old salts in Beaufort.

The town also has a fascinating cemetery with graves dating back to the 1700s.  A brochure to some of the gravesites of interest can be picked up at the historical center and list, among other things, the grave of an officer in the British Navy who died on board his ship.  Not wanting to be buried with his boots off, he was buried standing up in full uniform. 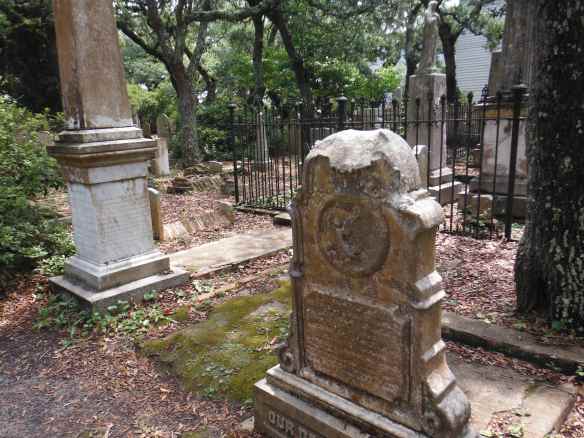 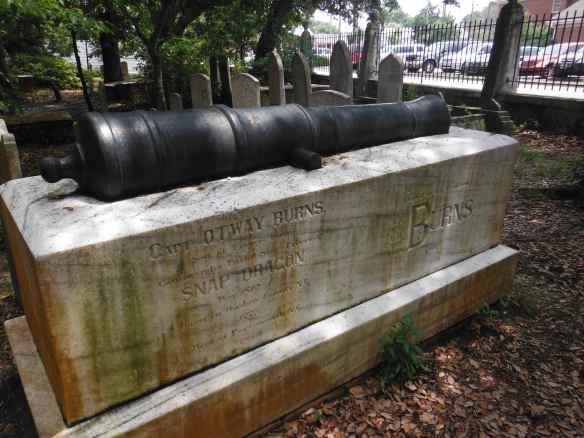 On returning to our boat yesterday, we saw a large double masted schooner aground just outside the channel.  I dinghied out to see if they needed anything while waiting for the tide to return.  Their massive steel schooner, s/v Troll, lay on her side unmoved by wind or waves.  The young couple on board had sailed her up from the Caribbean and are heading up the east coast on their way to Newfoundland then to Greenland and beyond.  Towboat US made vain attempts to free their boat, which finally refloated herself sometime between midnight and 2am.  We woke up to see her anchored next to us and look forward to hearing more of their story. 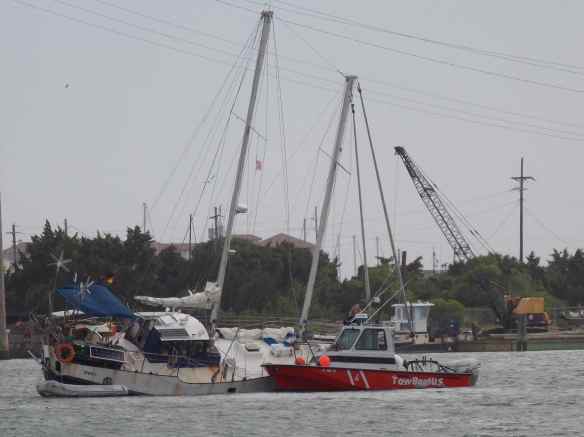 Troll aground just past the channel. 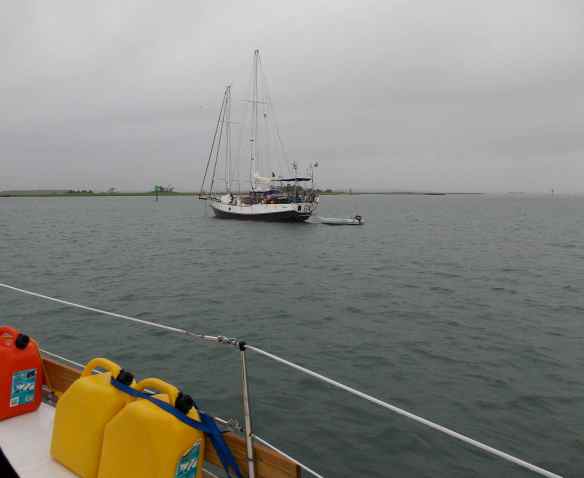 Troll at anchor the next morning.

1 thought on “Waiting Out the Weather in Beaufort, NC by Mark”