Truansea made back to the United States before the start of hurricane season.  Now where are we headed???  We had originally thought we would sail the Florida Keys and sell the boat in Fort Lauderdale at the end of the summer, but so many cruisers we met said, “You have to do the intracoastal waterway”.  We were given tips and ‘must see’ places from many cruisers. They also said it is a good place to sell the boat, so the Truansea crew plans on heading north to the Chesapeake where we will end the sailing part of our journey and sell her.  After that, we will pick up our vehicle from Fort Lauderdale and camp our way across the country again, back to Idaho.

It is a strange feeling being back in the US, zipping down the highway in a car with all the conveniences of America at our fingertips.  It is also strange to talk on the cell phone again.    Grocery stores are wonderful and overwhelming at the same time.  All of the strip malls make me dizzy looking at them.  So many stores.  So much advertising.  Everything is big and there is so much of it.  It felt good to retreat back to Truansea after our first car trip going to check in at customs at the airport in Ft. Pierce.

During our stay at Harbor Town Marina in Ft. Pierce, we saw a number of boats that we had sailed with in the Bahamas.  One of them was a catamaran, Glory Days I, which was on the hard at Harbor View Marina. The last time we saw this boat, we were anchored at Big Majors and they beached themselves in front of us, to avoid sinking, after having a hole punched in their hull during a regatta there.  A salvage company was working at pumping the water out and temporarily patching the hull.  As you can see from the photo, they appear to be close to getting up and running again.

Glory Days I beached at Big Majors with a hole in their hull. 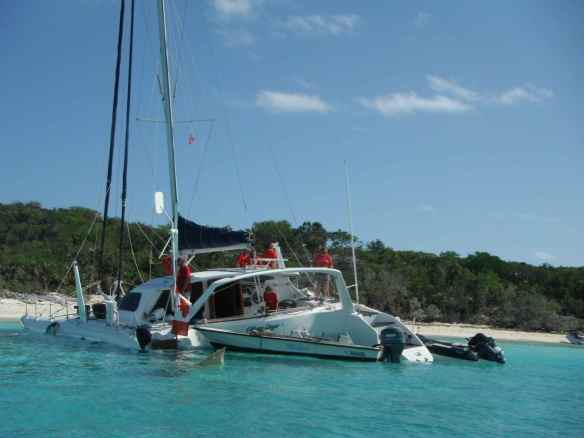 While we were waiting for our new fresh water pump to come in, we took a trip to Fort Lauderdale to visit friends and get a few items out of our car, which is in storage.

When I called one of our friends, Ross and Astrid, in Fort Lauderdale, to see if they would be home that weekend, Ross was going to be home but he was staying at their boat working on projects for the weekend.   He invited us to stay on their boat, Commotion, with him.  He surely heard the disappointment in my voice when I said, “Sure, we’d love to stay on the boat with you and help with some projects”.  I was secretly hoping to stay at a real house, with a real bathroom, and a real kitchen.  Of course, we had a great time with him as always.  Their boat is very comfortable and we helped him with a couple of boat projects while visiting. 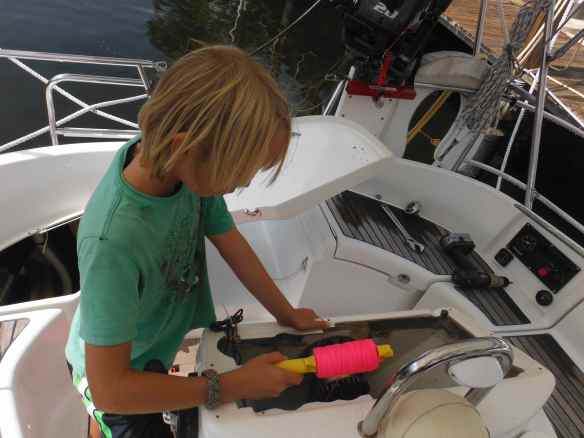 Cole helping with a wiring project on Commotion, a friend’s boat in Fort Lauderdale. 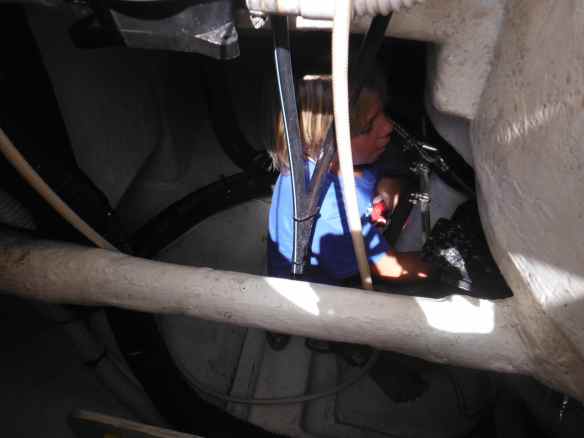 Logan in a lazarette on Commotion. Anyone shorter than 5 feet is a plus for this job.

We all took a break on Commotion Saturday evening to go over to a mutual friend’s house, Lee & Tina’s for dinner.  Lee has been working on his boat, In Sync, over the winter and making great progress.  The appetizers, dinner and evening were fantastic.  Thank you so much Lee and Tina!

We swung by the docks at Riviera, Fort Lauderdale, where we lived a couple of months preparing for the Bahamas.  Most of the people were not around that afternoon but we  walked the docks and caught up with a few of our old friends there.

We look forward to catching up with all of our Fort Lauderdale friends again at the end of the summer when we return to pick up our car.  It was a great place to prepare for our journey.  Everyone was instrumental in making the adventure happen for us.  Thank you all.

We learned that there was going to be a rocket launch at Canaveral in a couple of days so we bought tickets and took a day to visit the Kennedy Space Center.  We had a full day there and staked out a good spot to watch the rocket launch at 5:398pm.  Launches often get cancelled due to the weather conditions not being right but we were in luck and saw an Atlas rocket launch.  It was definitely the highlight of the day. 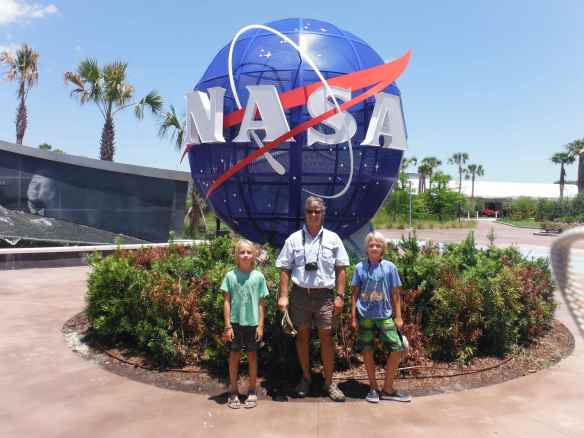 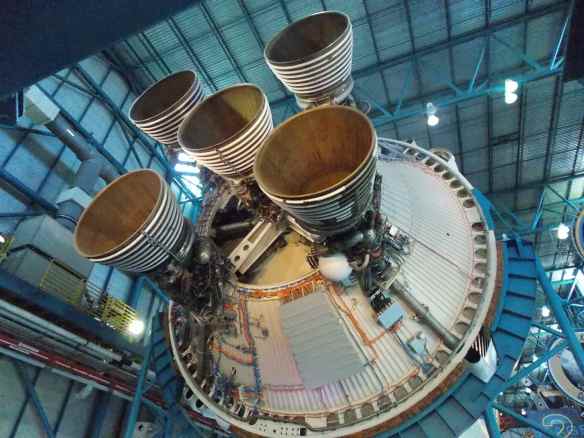 When we returned to Harbor Town Marina, we were able to spend time with a number of Bahamas boat friends.  We were redoing our floors a few pieces at a time at the shelter where people picnic and work on boat projects.  Bill on Providence and Steve on Slow Flight were working on a few projects of their own.  Mark also put in the new water pump and installed cockpit speakers while we were there.

We were planning on working our way north with them but they wrapped up their boat projects before we did and set sail, giving us daily progress reports and tips on where to anchor and things to see and do along the way.

Another boat, Take Two, was having a number of projects done as well and planned on staying a month.  Lambaroo and Chinook were there for a few days as well and we had a get together at the end of the restaurant dock one evening.  The kids had fun trying to catch tarpon and hanging out.

Take Two was the only boat still there in our immediate circle by the time we left.  As usual, it was hard to say good-bye.  I don’t know if you ever get used to saying good-bye in the cruising community.

Tom, on Lucent, returned from the Bahamas a few weeks before we did.  He has a dock at his house and had invited us to come dock, stay with him and help with any unfinished boat projects.  It was a half-day trip up to Satellite Beach and started out as a sunny, beautiful day.  About 1-½ hours before we got to his place, it started to rain, or should I say pour.  It poured buckets for an hour. Tom came in his dinghy to guide us the last hour through the canals to his house.  He was soaking wet with a big smile on his face when we reached Truansea.  We tied his dinghy to the stern of Truansea and he rode with us back to his place. There was so much rain Mark had to get in the dinghy to bail the water out.  It was a warm day and a warm rain but the guys without their rain suits started to get chilled so I made hot cocoa for everyone.  The joys of having your kitchen in your vehicle!

Parallel parking Truansea at Tom’s dock required a bit of a maneuvering.  Tom got in his dinghy and passed a line to the boys on the bow of our boat on starboard while Mark was in our dinghy pushing on the port stern.  I put Truansea in reverse briefly a couple of times and we slid right into the spot.  Never underestimate the power of a dinghy! 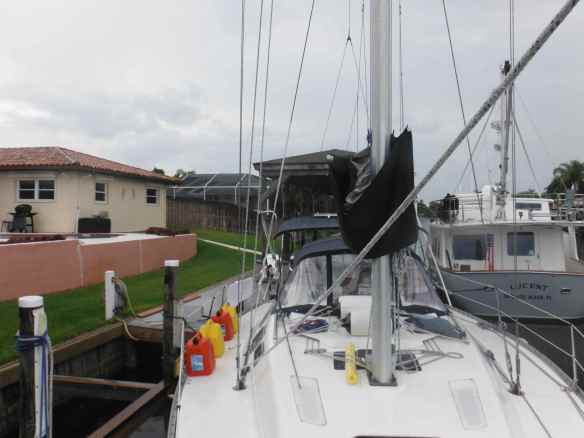 Truansea docked in front of Lucent.

A few weeks ago Tom had also offered his address to receive any packages, parts, mail, etc. for us.  One of the parts we ordered was a stator for the wind generator.  After we arrived at Tom’s house and opened packages, Tom went into action on the wind generator and Mark removed the remaining floorboards to be refinished.  Over the next few days Mark also changed the oil, and replaced a weak settee bench.  The wind generator has proven to be a challenge and is going to require another call to the manufacturer to figure it out.

Mark also helped Tom fix his sticky, sliding patio door.  This is the second sliding door Mark has helped to fix on this trip, apparently there is no shortage of stuck sliding doors in Florida. 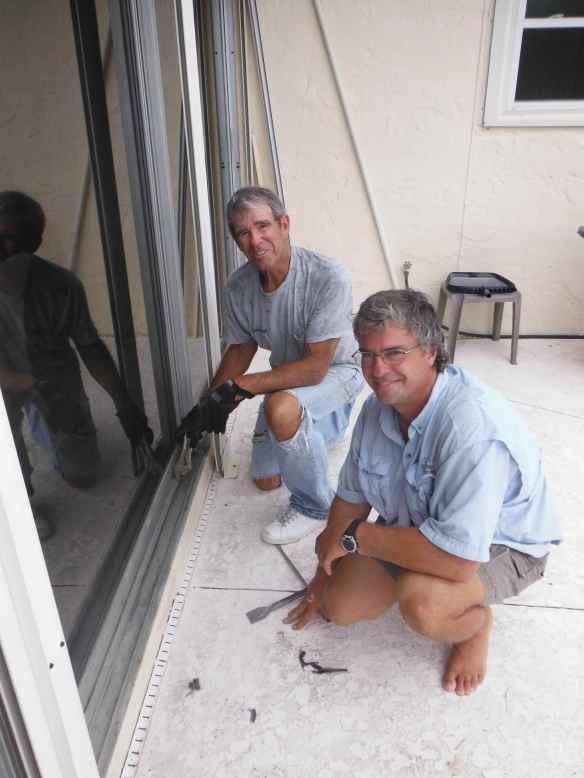 It is prime boat selling time and we are putting Truansea up for sale now in hopes that by the time we get to the Chesapeake, there will be new owners to take her.  Part of selling the boat is taking boat pictures so we also cleared out rooms on the boat one at a time and took photos to put in the listing.  During this process, we all found things we had been looking for.  Amazing how items can be misplaced in 37 feet.  Boat washing is a regular occurrence, but we also washed our boat again at Tom’s house to take external pictures for the listing. 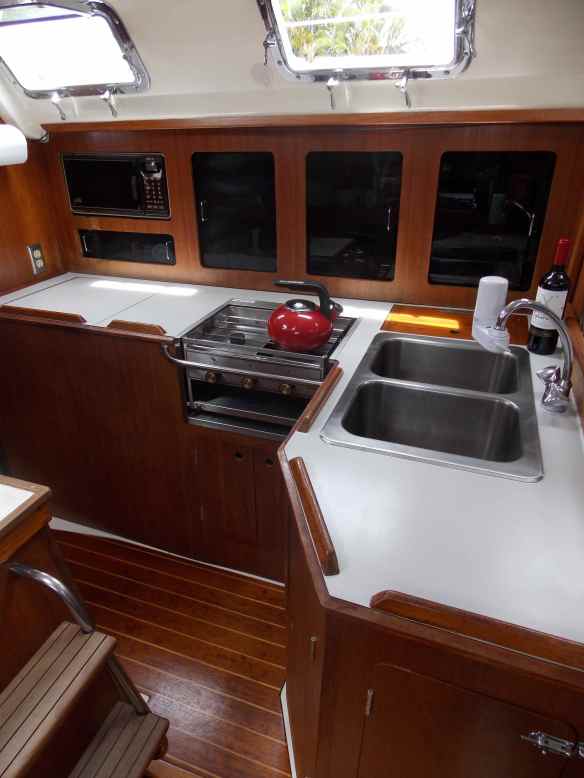 Did Mark do a great job on refinishing the floors or what?

Tom’s house was a fantastic place to get ‘recharged’.  Having use of a dock, garage, pool, house kitchen, house washing machine, house bathroom, etc. was just plain enjoyable.  We shared some fantastic meals with Tom, mainly making things in the oven that we could not make in our boat omnia oven over the last 8 months.  Tom gave us full use of his car as well, which is incredibly helpful.

What kind of a person keeps their motorcycle in their foyer? Someone as cool as Tom does!

Our mail from Idaho arrived on May 22nd and the only thing I wasn’t expecting was Florida boat registration paperwork.  Both the sailboat and dinghy were due on the 23rd – the next day!  Strange, I thought, why the 23rd.  That’s not when we bought either of the boats.  What is so special about May 23rd?  It finally dawned on me.  It is Mark’s birthday.  Yes, this month it really is his birthday.  Last month you readers may remember we thought it was May but it was only April.  Tom took me to the local registration office so I could get the boat stickers and we swung in to pick up a key lime pie as a birthday cake of sorts.  It seemed the appropriate birthday cake here in Florida.

The next day, on Mark’s birthday, we said farewell to Tom and headed north again. As are most cruisers, Tom is so helpful, attentive to our questions and just plain fun to be around.  He only met us a couple months ago but opened up his home to us.  It was hard to say goodbye.

Tom, thank you so much for your hospitality and all the projects you helped with on Truansea.  You helped to make the next phase of our journey possible.

As we cruised north that day, there were security warnings on the VHF radio.  When there is a shuttle launching at Canaveral, they close certain waterways to traffic.  It was just last Wednesday that we watched an Atlas rocket launch.  As the day progressed, the winds increased and there was storm activity so they scrubbed the launch.

The next evening we anchored off of Fort Matanzas and were on the deck of Truansea fishing and Logan said, “Look at the rocket!”.  It was the rocket launch that had been scrubbed the night before.  We had a fantastic view of it.  We were lucky to have been able to see two rocket launches passing through the area.  The fort was a good historical introduction to St. Augustine which we are headed to next.

Rock contral after launch. To the right is Fort Matanzas constructed in 1740.  You can barely see the rocket at the top of the picture.  It was an amazing scene to see the how far we’ve gone in the span of only 273 years.

6 thoughts on “Now Where? by Christine”