Our friends Deb and Don on Valkyrie encouraged us to anchor off the east side of Morgan Island after leaving Beaufort, SC so we dropped the hook on the east side of the island for the night.  Not only is it a beautiful spot but the island is inhabited by rhesus monkeys.  No joke.  I would have thought we were off an island in the tropics listening to the monkeys screeching. 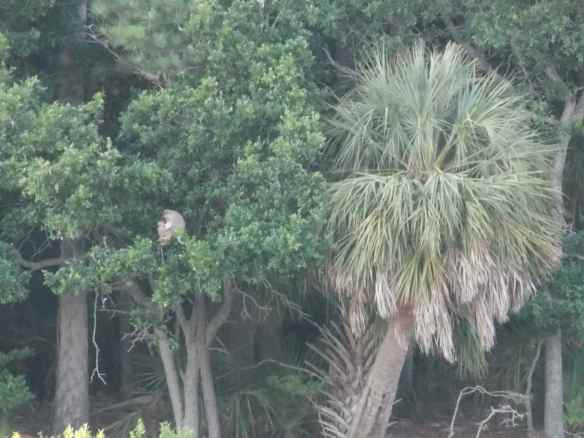 Some of the monkeys we saw on Morgan’s Island.

In 1979, over 1,400 monkeys were moved here from Puerto Rico.  There are signs on the shore that warn not to trespass, not to feed the monkeys and say Federal Project.  There is  quite a bit of conflicting information on the internet as to what the monkeys are doing there and how they are being managed.  At any rate, as evening approached, the trees on the shore near us started shaking and soon we started seeing monkeys all over in the trees with some of them in the grass near the shore.  They were fun to watch and stayed for about an hour, some of them just sitting watching us, before they moved back into the forest for the night.

The evening got more exciting when Logan caught a 3 foot shark which we brought in the cockpit, but that is a story for him to tell on his next post.

The next morning we headed for Charleston to meet our cruising friends on Moonshadow and see the city.  Unfortunately Laurie was out-of-town but we had a great time with Rob.  He toured us around the city in their car and took us to Trader Joe’s.  What a treat to have friends with a car and be able to stock up on some good food!  Cruisers hospitality and generosity is incredible. 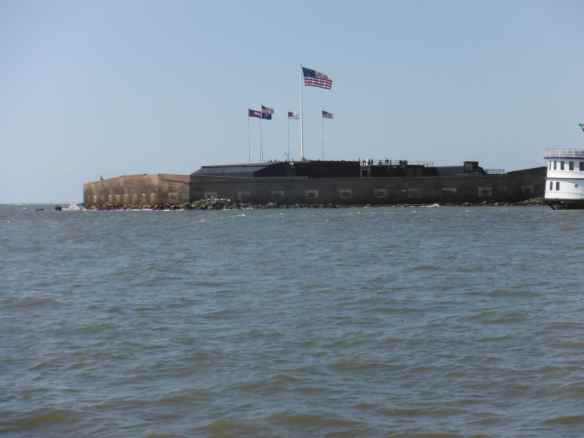 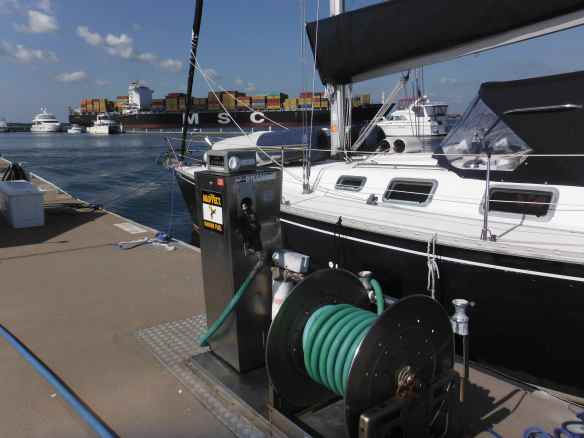 We are at a fuel dock in Charleston. It was a busy harbor as you can see by the container ship in the background.

After exploring Charleston for a couple of days, we headed north and anchored in a secluded anchorage at Awendaw Creek.  There was one other boat in the anchorage; otherwise our only other neighbors were the pelicans which we watched dive again and again for fish as the sun set.  They repeated their performance again the next morning.

The ICW is different every day not only in scenery but in navigation challenges.  We spend a good deal of time every day studying the charts for the following days.  Some areas you can only go through at high tide or you will run aground, others are best during the ebb tide to catch the current to help us gain a couple of knots of speed.  Some sections are best at slack tide so the current is not pushing us through uncontrollably.  The swing and draw bridges have to be timed or you may be sitting there for hours waiting for the next opening.  Of course there is always the weather to consider as well.

I thought I would show you not only some of the scenes we see along the way but some of the navigation aids and some photos of how we spend our days. 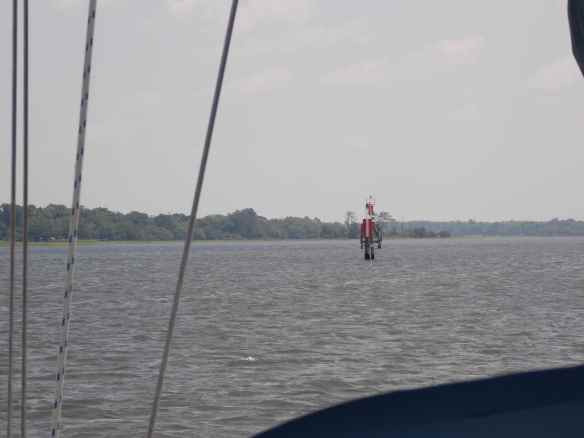 Some stretches of dredged channels you need to stay in have range markers on them.  You need to line up the two markers so the white lines match up and head straight for them to keep in the channel.  If you get off to the side, the white strips are not in alignment indicating you need to get back on track. 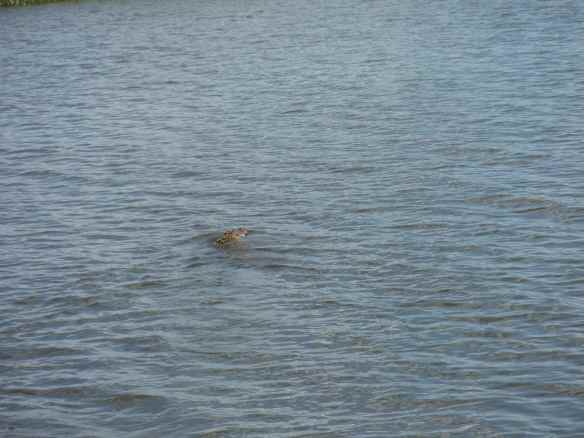 The gators are shy and we have not been able to get too close to any of them. 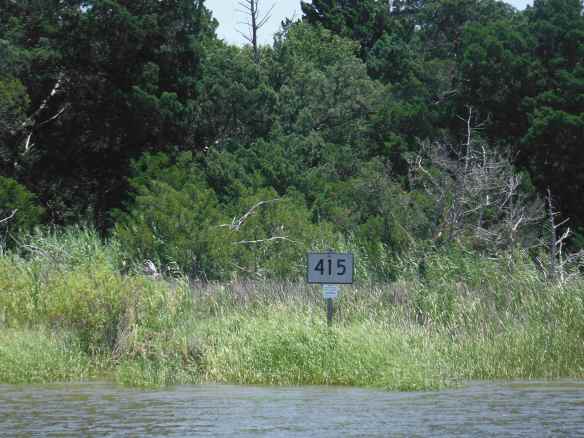 This is the first mile marker sign we have seen on the ICW. 415 miles to go! 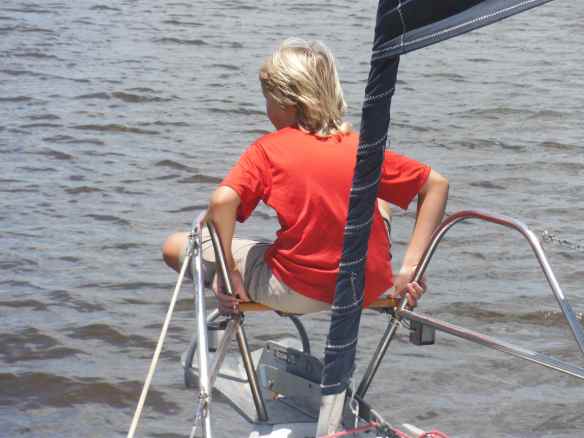 Logan hanging out on the bow of Truansea. 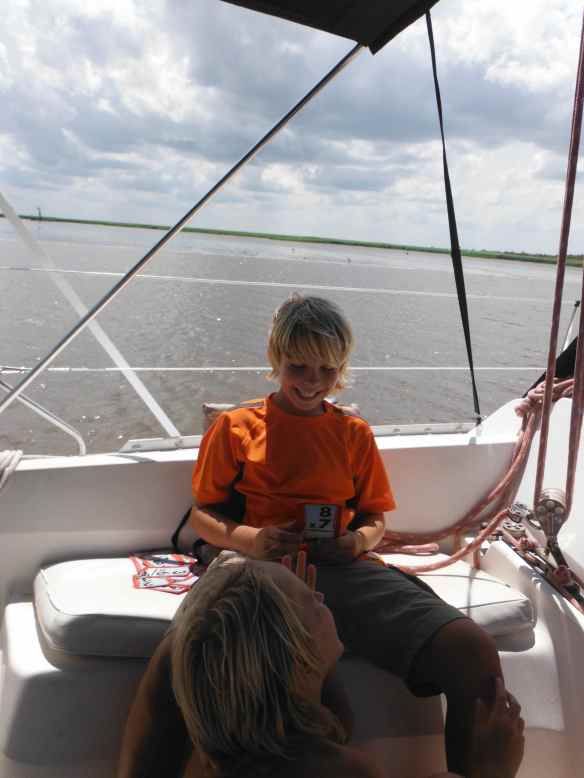 Is doing math multiplication flash cards really this much fun every day?  For some reason, today 8X7 was really funny. 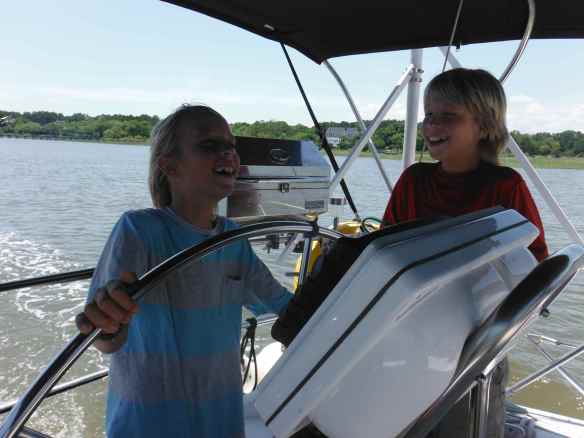 The boys just plain having another silly day. 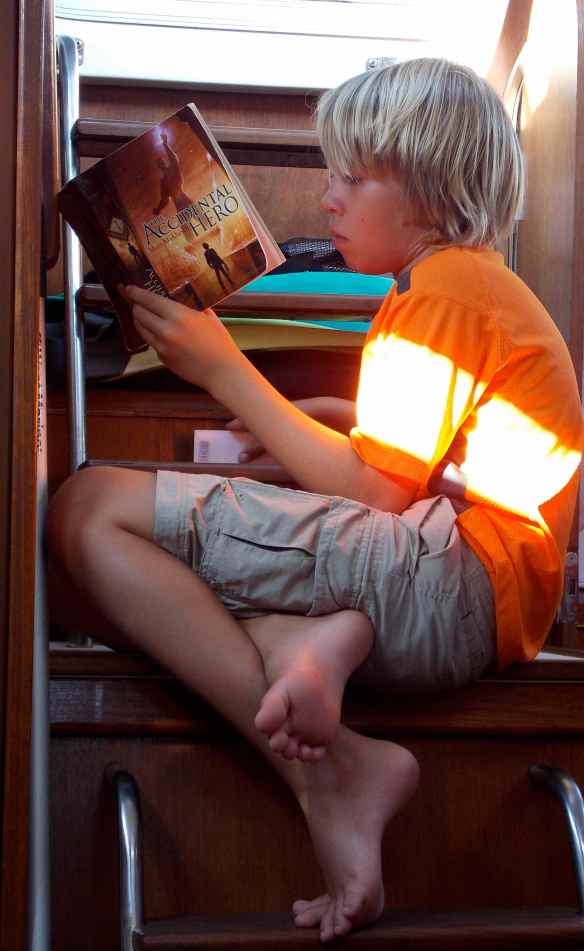 Logan hanging out reading a book his friend, Max, sent him. 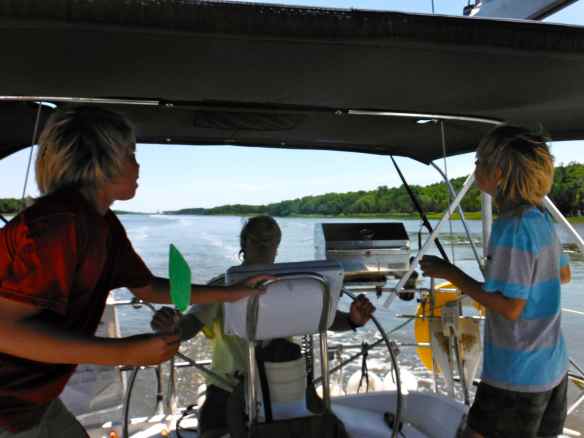 Cap’n Mark taking us north as the boys swat the green head flies that are abundant along this stretch of South Carolina. It provides them with hours of entertainment and exercise. 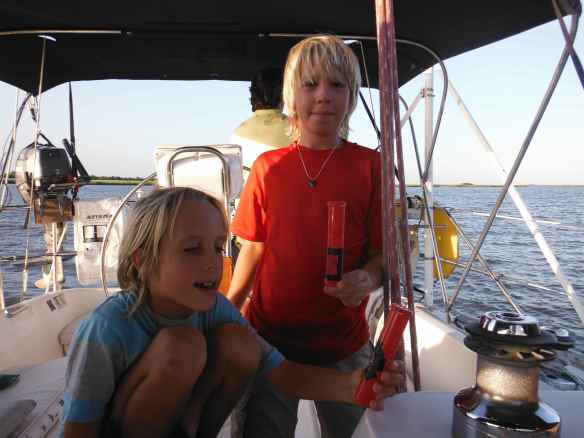 When they are not killing the flies, they are catching them and keeping them as pets.  They made fly houses out of M&M containers given to them by our friends, the LaVignes back in George Town, Bahamas in February.  You can see where they cut a hole in the tube and inserted a clear plastic piece from a water bottle so they can see their ‘pets’.  This is one way to entertain yourself on a boat!

The dayboards for the ICW are green squares with odd numbers (with a small yellow reflective square on the top) along the ocean side of the waterway and red triangles with even numbers (with small yellow reflective triangles) along the inland side.  The saying of “Red, right, returning” that sailors use when returning from the sea does not pertain to the ICW markers.  The red and green inlet markers without the yellow reflectors have the traditional rule of red, right, returning so we have to follow the rules according to which waterways the markers are for.  There are also sometimes small floating aides with an “A” after the number.  These are placed in areas of shoaling and should be given a wide berth. 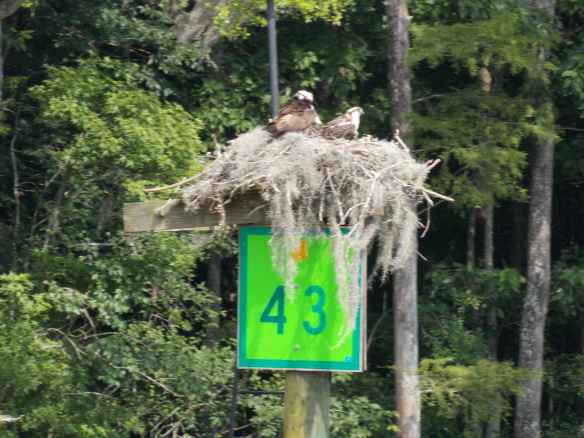 Osprey nest on one of the green ICW signs which mark the ocean side of the channel. 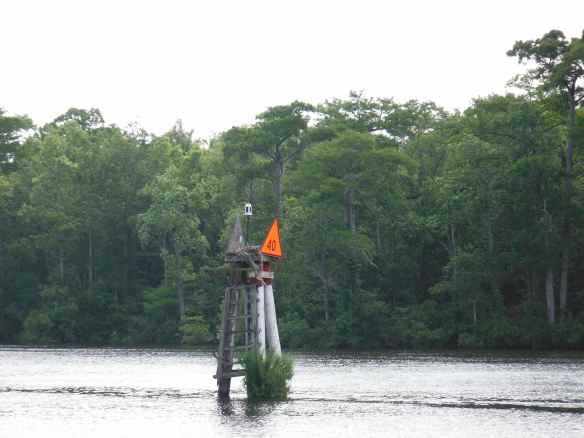 Red triangles mark the inland side of the channel. 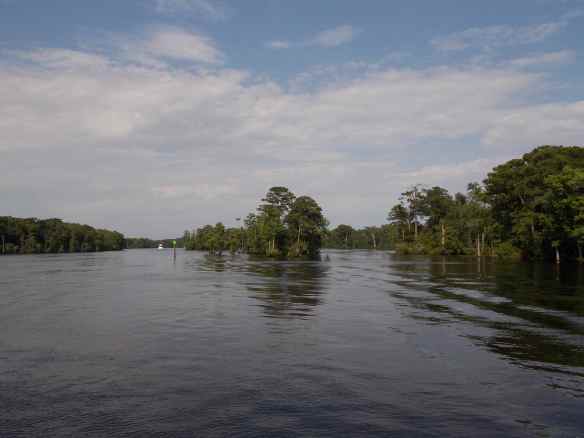 Here you can see the green ICW sign ahead of us indicating that we need to go left and keep the sign on our starboard side as we head north.

Dolphins continue to grace us with their presence.  When they decide to come and swim off our bow, they jump or surface and make a straight line right for us.  They truly love to play with our boat and will roll on their side as they swim to look up at us.

On to Georgetown, South Carolina (we were in George Town, Bahamas this winter).  This was a fun, small town to stop at and anchor for the night. 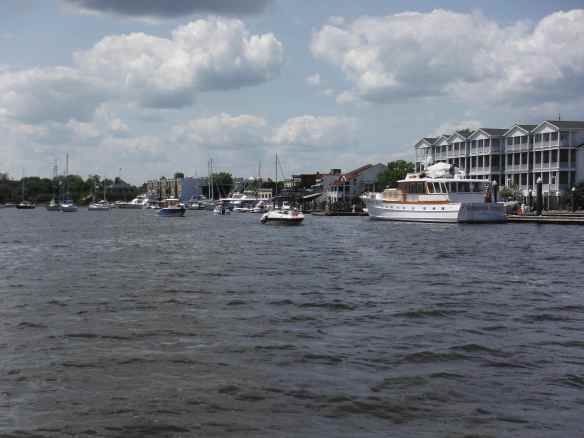 Coming in to port at Georgetown, SC. 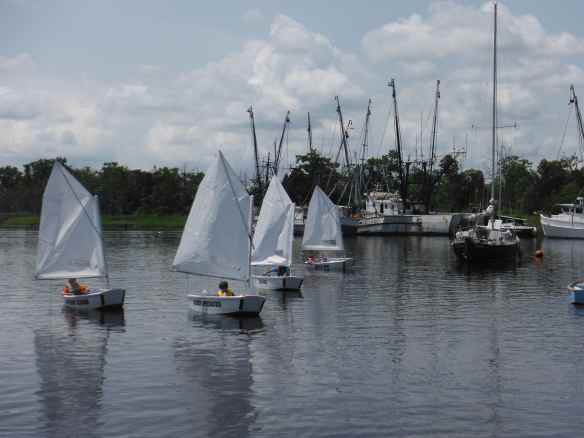 Logan was able to catch his first bait fish here with the cast net we had picked up in Brunswick.  The boys identify all the fish we catch.  They usually know what it is before it is even brought on board since they spend so much time studying the fish identification books. 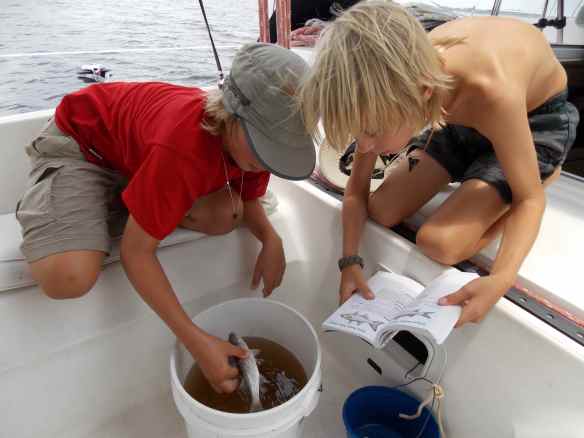 Logan holding the fish while Cole has the book out so they can identify it.

We are now at Osprey Marina near Myrtle Beach, SC.  The scenery is absolutely beautiful and we have seen a lot of turtles and osprey in the area (as the name of the marina indicates). 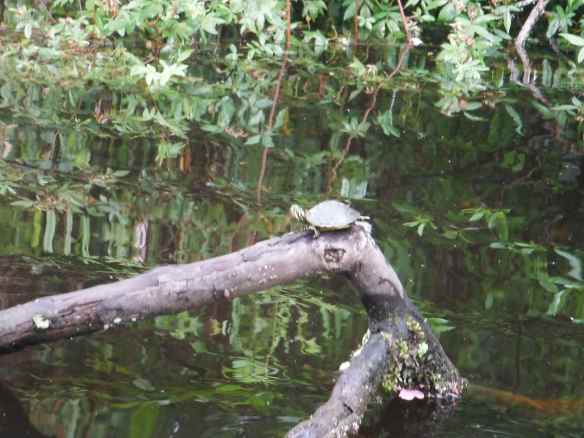 Baby painted turtle we saw while taking our dinghy up a channel. 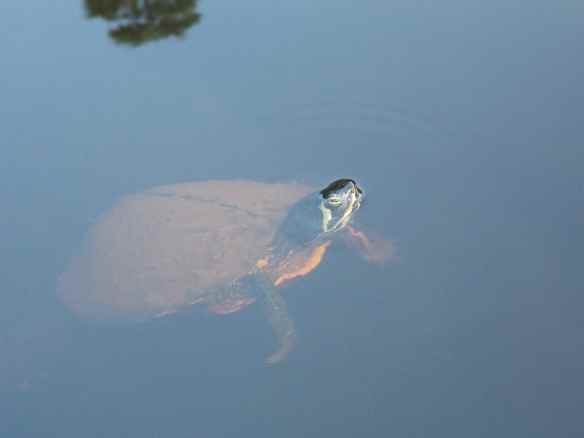 The turtles around the boats at the docks beg for food just like dogs.

Tomorrow morning we head out for a long day and our goal is Southport.  Our cruising friends send us tips of places to go, places to avoid and places that need to be timed right.  This along with the guide books has made for a fantastic trip up the ICW.  Thanks to all of you for sending us and calling us with these tips!

3 thoughts on “Onward to Myrtle Beach, South Carolina by Christine”