We waited out a front in Rock Sound, Eleuthera before making our way north to eventually cross to the Abacos.  The night before we headed north, the winds were forecasted to be 40-50 knots but the highest gusts we saw were 36 knots.  Along with the storm came a beautiful rainfall.  This was only the second big rainfall we have experienced since arriving in the Bahamas in the beginning of December.  Fresh water is hard to come by out here and we made full use of it by filling up all of our available containers first, taking baths next, and finally washing the boat. 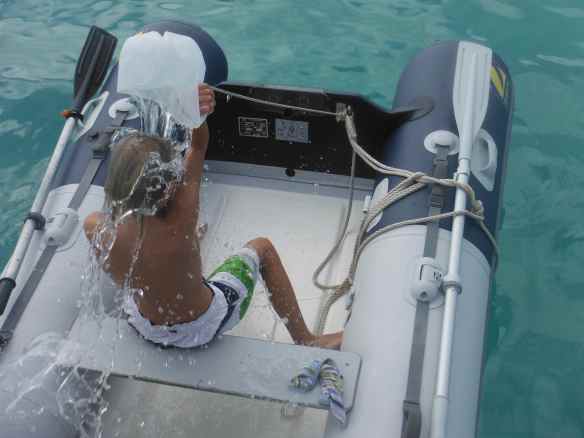 Dinghy baths for everyone!

We spent a few days working our way to Spanish Wells where we waited for our next weather window to open up to cross to the Abacos.  The first night we anchored near a catamaran and saw kids on the deck!  We have not run into any boat kids for a while.  Logan and Cole were yelling and waving at the other kids as we approached the anchorage.  Their kids had the same reaction and within 15 minutes, we all met on the beach.  We spent a few days with them before we headed north again.  They were working on a few engine issues before they could move on.  It was hard to say goodbye, but hopefully they will get their boat done soon and catch up with us.

Some other boat friends we previously met in Black Point on Great Mysterious were also experiencing engine difficulties but decided to try to sail to the Abacos and back to Florida to finish their repairs.  A bunch of us were anchored at Royal Island in a bay.  The wind was blowing into the anchorage and Great Mysterious would have a difficult, if not impossible, time getting out so we offered to give them a tow out the next morning.

Towing Great Mysterious out of the Royal Island inlet.

The weather was predicted to be a great sailing day and about 8 boats left the anchorage that morning, headed to the Abacos.  The winds started out light but quickly filled in.  Great Mysterious is a smaller boat and was not able to sail fast enough to make it to the Abacos before night so they eventually turned back.  You can check out their blog post at http://www.greatmysterious.com.  We hope they get their boat running soon and see them in the Abacos.  A bad boating day can be really bad (I know).  It can only get better Britt and Dolby.  Hang in there.

We have had bad boat days, but crossing to the Abacos was not one of them.  We must have made good boating karma giving a tow that morning because we had our best sailing day ever.  We sailed the whole way, mostly at 6.5 to 7.1 knots on a comfortable broad reach.  The inlet at Little Harbor, Abaco was fairly calm and we were soon anchored on the west side of Lynyard Cay with time to spend on the beach before dark.

Great Mysterious took this picture of us on Truansea sailing to the Abacos.

The next morning we sailed to Sandy Cay where we anchored for a couple of hours to snorkel the reefs.  The anchorage has poor holding and is definitely not the place to spend a night.  The snorkeling was outstanding. 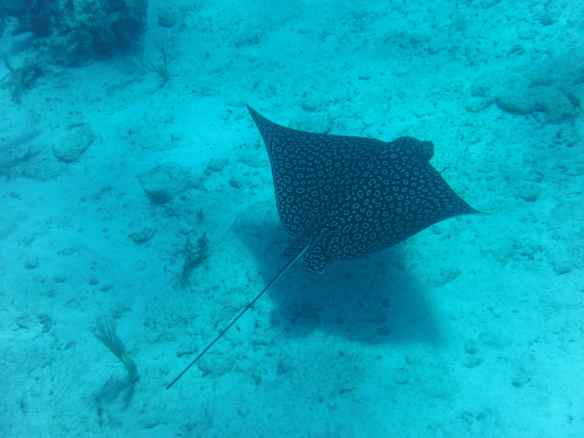 We continued on to Hope Town on Elbow Cay and picked up a mooring ball in their anchorage to be close to town.  As we came into the anchorage it was like a reunion.  We saw about 12 other boats we met in previous harbors.  It has been fun and busy catching up with everyone again!  Hope Town is beautiful and we have enjoyed seeing the town as well as the island.

One morning we were in town at a coffee shop working on the computer while the boys were doing their schoolwork.  A couple of girls were having breakfast and as they were leaving, they asked us if we were writing a book.  We explained that we were a family sailing for a year.  They had come to Hope Town for a 4 day visit and were renting a place up the road.  They said they were taking the water taxi to the other side of the harbor next to spend part of the day.  We offered to give them a ride since it is close to our boat.  We asked them if they would like to see our boat on the way over so we stopped at Truansea to give them a tour.  The boys showed them around and the boys asked them a few questions.  Everyone we meet is interesting and these two were no exception.  Sarah is an actress.  http://www.sarahdaceycharles.com and Carol is a life coach.  http://www.whynotthrivecoaching.com

Sarah and Carol – thanks for taking the time to answer the boys (and our) questions.  It was so much fun!

We have been waiting for a new raw water pump for our boat and it finally arrived today.  Mark will install it today or tomorrow and we will be ready to head north to Marsh Harbor and Man-O-War next.  One of our boating buddies, Bill, on Providence needed a new impeller and water pump before he could continue on as well.  Mark and Bill spent a large part of the day yesterday tearing into his engine.  As they say, cruising is working on your boat in exotic locations…

2 thoughts on “Crossing to the Abacos by Christine”