It was back at Lee Stocking Island when we met Don and Debbie at a bonfire on the beach.  Our boys were busy building a fort while we talked with the other cruisers and watched another sunset over the Exumas.  The next day, we met Don and Debbie again at the old research lab on the island.  Don started explaining fuses and electrical panels to our boys with a home field advantage he had gained from years of experience as an electrical contractor.  Debbie had been a teacher and took a liking to our boys and asked them how they liked the cruising life and schooling on a boat.

We told them about all of the exciting things we had discovered on the island and that the boys were busy writing a couple of spooky stories about the island and the research lab.  Don and Debbie couldn’t wait to hear their tales and we promised them the stories as the boys completed their chapters.  Over the next several days, and anchorages, as we traveled up the Exumas, the boys read them their stories over the VHF radio.  Finally at Shroud Cay we anchored Truansea next to Don and Debbie on their boat Valkyrie, a Nordhavn 55.  They had been traveling with a friend of theirs, Tom, who also owns a Nordhavn 46 named Lucent.

To sail with Nordhavns is a bit like sailing with the US Navy.  Maybe it was the touch of battleship grey in their paint or the slanted windows of their bridge but there was certainly a feeling of security just in traveling with these ocean capable cruisers.  Valkyrie overshadowed our little dinghy when we motored over the day before Easter to dye eggs.  Tom had graciously donated the eggs for the occasion and Deb had the food coloring.

If the outside of a Nordhavn appears slightly militaristic from a far, the interior is anything but!  Both Valkyrie and Lucent had interior designs that were so attractive and so comfortable that after we went back to our little boat, by comparison, I felt like I was waiting at a bus stop when I sat back down on our bench style settees. 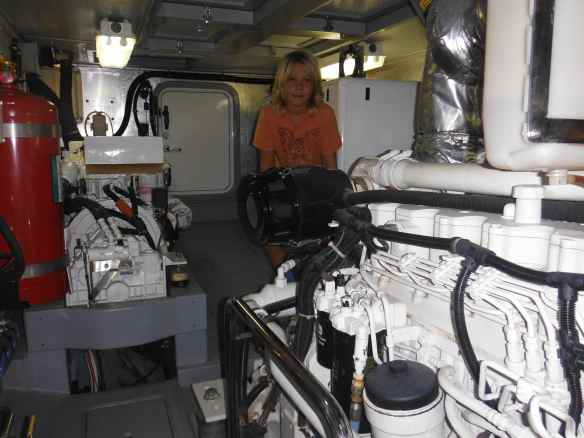 The engine room showing the main and secondary engines.

Don later gave us the full tour of their boat.  He showed us the engine room with its main 8.2-liter, 330 horsepower, John Deere engine and a secondary engine, a 70 HP Lugger diesel with its own shaft and folding prop.  Some trawlers of this size may have two main engines but it is easy to imagine the added expense of having two primary engines.  The secondary, or wing, engine gives you the added security of making it back to port if the main engine failed at a lesser expense.

Don had to replace some of the anodes under his boat and invited our boys over to dive beneath his boat using a regulator.  Needless to say they jumped (in the water) at the chance!  Beneath the water the boys dove along Valkyrie’s hull.  Toward the bow, two small wings spread out on each side of the hull.  These were the stabilizers that operate while the boat is underway to reduce their rolling in rough seas.  Simply put, when the boat heels to port, the port stabilizer will tilt up at the same time the starboard stabilizer will tilt down.  The effect is similar to putting your hand out of a car window and feeling the wind raising or lowering your arm as you move your hand.

Don, Debbie and Roux at the helm.

Their Nordhavns displacement was a mere 125,000 pounds.  That’s nearly as much as two semis.  It takes a bit of fuel to push something that big through the water.  I guess it’s why they have a pretty big fuel tank, to the tune of 2,300 gallons!  At 7 knots, their engine burns 3.8 gallons of fuel per hour.  Don laughed when he said anytime you measure in gallons per hour, it is a good indicator that you’re not talking about great fuel economy.

Don, Debbie and Tom all came over to our boat for Easter morning (7am) as the boys searched for eggs.  Who knew the Easter bunny could swim! 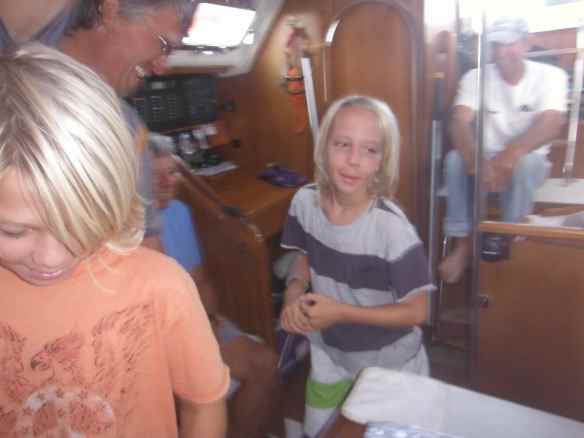 Searching for eggs on Truansea.

Valkyrie moved on, back towards the states via Nassau while we waited for a break in the weather to cross to Eleuthera.  The day we chose to cross turned out to be too windy for our comfort and we turned back while Tom on Lucent pressed on through 8 foot swells, but hey, if your bow is at least that high so is your comfort level.

Tom raising the anchor on Lucent.

We caught up with Tom the next day as we drifted into Rock Sound but that’s another story.  Suffice to say, I was happy we hadn’t chose to sail the day before!

3 thoughts on “Running With the Nordhavns by Mark”