We have now been at Lee Stocking Island, the site of an abandoned oceanographic research facility, for 5 days.  Since we are not in a big rush to move north (the wind has been in the wrong direction for us to sail), we have been content to spend our time exploring the island and made friends with some of the other boaters in the anchorage.  I thought that the reader might enjoy meeting them yourself so asked two couples on different boats a few questions about themselves and their boats.

The boat just astern of us at the moment is called First Nanny.  She is a Cape Islander 36.  Her owners are Tony and Renate, originally from Berlin, Germany they bought a piece of land and built a cabin in Nova Scotia after choosing to change their lifestyle and retire early.  After that they started thinking about cruising on a traditional boat.  Tony had thought about building his own boat but ultimately he chose to renovate a retired lobster boat because he liked the looks of a more traditional craft.  Built for heavy work in the North Atlantic it has a low sheer aft and a precipitous bow. 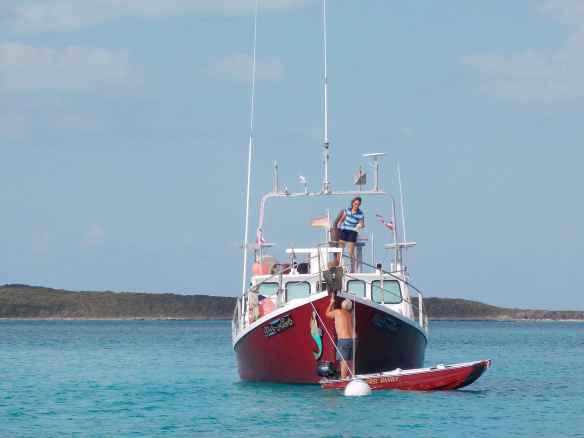 Their boat is a reflection of their life I think.  She is a simple fishing boat converted for living aboard yet is equipped with all of the extras that a long term cruiser would want.  They have an SSB radio for getting weather information and their electrical power comes from three solar panels and a 2kw generator.  They have recently added refrigeration and use a simple camp stove and a toaster oven for all of their cooking.  Renate bakes bread in the oven every other day, which is run off of an inverter. 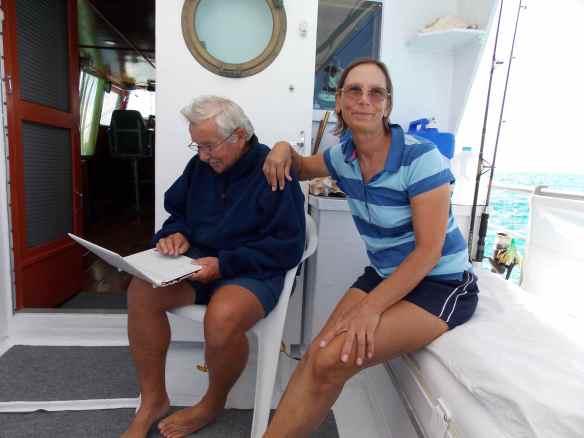 Tony and Renate aboard First Nanny.

First Nanny was built in 1964 and was used to fish for lobsters and is powered by the original 135hp Ford Leman diesel engine.  After purchasing the boat they made improvements to make her more comfortable for cruising.  They added several feet of interior cabin space and replanked the cabin sole. Altogether they spent 5 summers working on rebuilding her.  Tony and Renate cruise on First Nanny about 6 months out of the year and then either go back to their cabin in Canada or to their home in Berlin for the rest of the year to visit their two children.

Their cabin, which is as unique as their boat, is located deep in the woods of Nova Scotia, 35 miles from the nearest town.  They have no power but use a generator to pump water into a holding tank.  The latest addition to their property was a bathhouse that Tony built.  It is a glass gazebo with a bathtub inside and wood heats the water heater, which fills the tub. 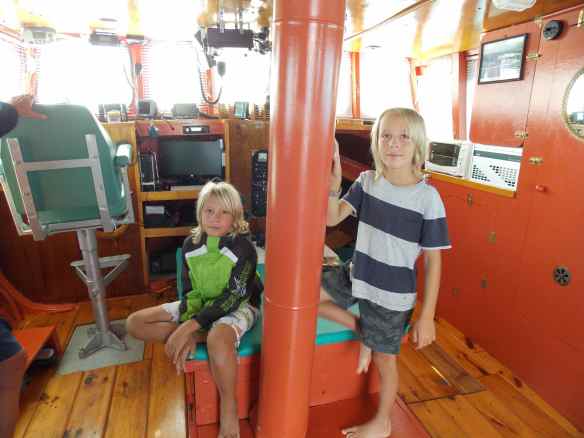 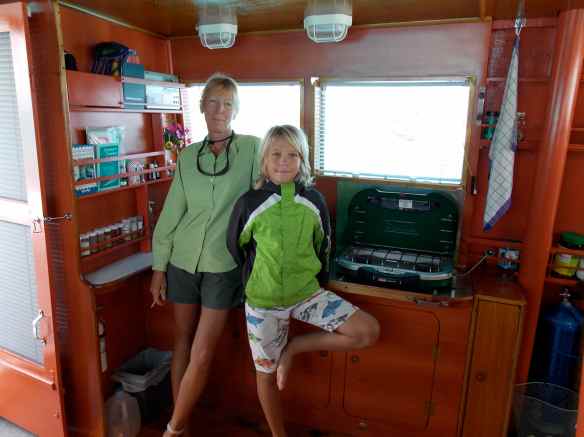 I have read of accounts of sailors who have seen apparitions while cruising so I listened eagerly when Tony related an experience he had on their first gulf crossing. They were crossing the Gulfstream at night when all of the electronics on their boat went down.  With no VHF or chart plotter to guide him thru the darkness he was trying to troubleshoot his systems when he saw the image of a bearded man on the forward deck looking back at him through the glass.  He spoke to Tony and told him not to worry, that he just needed a few minutes.  After ten minutes all of the electronics began working again.  It was some time later when Tony realized that the person he saw on deck was the same fisherman that is in a very early photograph of the boat when it was used for lobster fishing that he has framed in the cabin.

Picture of First Nanny when it was a lobster boat.

We were invited over to their boat for dinner one evening and Renate made a delicious fish soup and an equally fantastic potato salad another night.  Their lifestyle may be simplified but like the extra equipment on their boat Renate was preparing gourmet meals with a minimum of ingredients and spices. Her recipe for fish soup follows.

Simmer for 20 minutes.  Then add the rest of the ingredients.

1-2 yellow zucchini sliced (we omitted this)
cubed fish (They say Monk Fish is the best.  We had Mahi Mahi this night)
½ cup dry rice

Simmer about 15 minutes until rice and vegetables are tender.

Our other boat neighbors are Bud and Eileen on Sea Camp a Witby 42.  Their boat is a center cockpit design with a spacious aft cabin.  When they purchased their boat they had a five-year plan for cruising the Caribbean.  The boat had come with and engine driven refrigeration system but that required running their 65 hp Perkins twice a day for an hour to cool down the coldplates.  Bud has since converted to a more conventional 12v compressor. His large battery bank is kept topped off with a wind turbine and a 200w solar panel mounted to the top of his davits.  Six batteries onboard are capable of storing an impressive 1400 amp hours!  As a comparison our single house battery stores a more modest 230 amp hours, an amount that has been adequate for our needs but it just goes to show the lengths you need to go to get those precious ice cubes in ones drink.  It’s also why we like to suggest having cocktails on their boat whenever the opportunity permits! 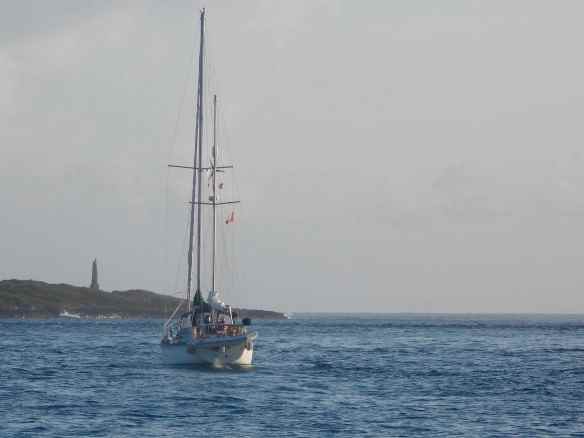 Bud and Eileen carry equally impressive reserves of water and fuel.   With enough tankage to hold 270 gallons of water and 200 gallons of fuel they rarely have to buy water or pull into port to take on more fuel.  They are a ship of the desert but unlike their “camelian” counterpart they store their vast reserves not in a hump but closer to the keel.

If the wind doesn’t blow and the sun refuses to shine they still have a 2kw generator as a last resort but there are few days in the Bahamas I think when they would have to resort to using the generator.  They bought their boat on the Chesapeake and have been sailing in the Bahamas for five years now.  They still have their home in Manitoba and have another lake sailing boat there, a C&C 26 named Gypsy that they sailed with their two children before purchasing their Whitby. 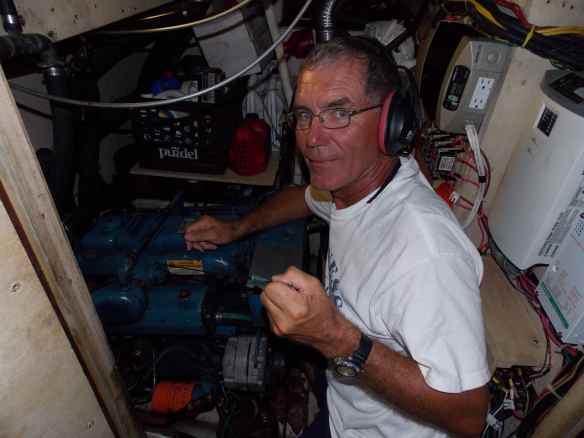 Bud showing the boys the engine.

Bud had worked in Canada as an electrical engineer and Eileen taught high school chemistry.  While they have enjoyed the cruising lifestyle they are thinking about the next adventure and would like to travel abroad, perhaps living in different countries for several months at a time.

One day when Christine was contemplating how to cook up a squash on the boat for a little variety Eileen offered the following recipe for yet another fantastic soup.

We have enjoyed listening to their Canadian perspectives almost as much as the sound of another tray of ice cubes being broken into!

Simmer until vegetables are tender then puree.  We do not have a blender so we lightly mashed it with a large spoon.

Serve with a dollop of sour cream or yogurt.  We did not have either of these and it was still fantastic.

3 thoughts on “Recipes for conversation by Mark”