“Vege… what?” I thought when I first heard our Tazmanian/Australian friend mention his morning breakfast of Vegemite on toast. A couple of days later I heard him mention putting Vegemite in the soup he was making and on his cheese sandwich. He also hosted National Australian Day breakfast on his boat for all of the Australians in the bay with none other than Vegemite toast. Now my curiosity was peaked. I love trying new foods, especially different nationalities.

David comes over for breakfast and coffee some mornings and one morning he brought over his Vegemite. We toasted the bread on the grill, buttered it and David spread a thin layer on top. He emphasized Americans must only put a thin layer on. We were warned not to spread it thick like peanut butter. The paste in the jar is thick and black smelling yeasty and something else I could not identify with. Maybe hoppy? It tasted salty and a little strong or bitter. It probably does not sound too appealing yet, but it was fantastic with morning coffee! I love the stuff! Maybe it is having my family, good company on the boat in a beautiful Bahama anchorage that made it taste so good. 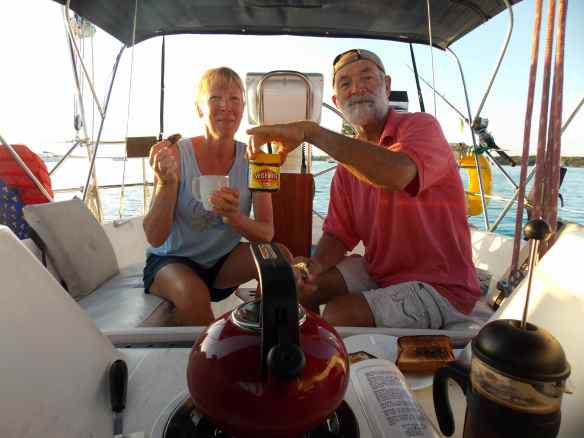 David and me in the cockpit of Truansea enjoying a great breakfast.

The paste was invented in 1922 when the Australian food company Fred Walker & Co. gave Cyril P. Callister the task of developing a spread from the dumped yeast from breweries. Talk about recycling! He came up with a way to extract the liquid and blended salt, onion and celery extracts to form the sticky black paste. It was endorsed by the British Medical Association as being rich in vitamin B, rationed during World War II, included in the Australian Army rations and was used in 9 out of 10 Australian homes.

David told us they ate it as children on their Australian farm and sang the jingle he knew from childhood used to promote Vegemite. It reminded me of how we all know the Oscar Mayer Weiner song. It is produced by Kraft foods.

After expressing my love of Vegemite, David brought over a jar of my very own a couple of mornings later. I was instructed on the ritual that must be followed upon opening a new jar. First you twist the top off breaking the seal, then stick your nose close to the paste in the jar and inhale deeply. It is somewhat like smelling coffee when you open a new can (yes we drink ground, canned coffee on the boat). Then you dip in your pinky finger and get a small amount of the paste on it and lick it off your finger. The jar is christened and ready for use.

Cole’s reaction to it was not the same as mine.

Try it yourself and let me know what you think!  I doubt if it is for sale in many stores, but I do see it on Amazon.  http://www.amazon.com/Kraft-Vegemite-400g-Jar/dp/B002O10K6C

If you have your own obscure food item that you have tried and love, please share it with me.

7 thoughts on “Vegemite! by Christine”