After spending another night anchored at Lake Sylvia earlier in the week, we were finally ready to take a bigger shakedown cruise to Biscayne Bay in Miami.  The winds were forecasted to be from the north at 10-15 knots for the next 3 days which would be a great sail downwind to the bay so we decided to leave last Friday morning (11/16/12).

Logan checking out the mega yachts we pass by.

We are feeling comfortable navigating through the intercoastal waterway now.  To get our boat out to the Port Everglades entrance to the Atlantic in Fort Lauderdale, we have to go through the Las Olas Bridge opening and the 17th Street Bridge opening.  Our mast is 59′ high and we can not make it under these bridges when they are closed.  After we were out of the Port Everglades channel, we headed south, raised the sails and cut the engine.  The winds were only 10 knots at best, dropping to 5 at times.  Our sails were flogging and the south current against the north wind made an uncomfortable chop so we started our engine and motored.  We had a 5 hour journey to make and this was a good test of our engine, especially the new high output alternator Mark put on yesterday. 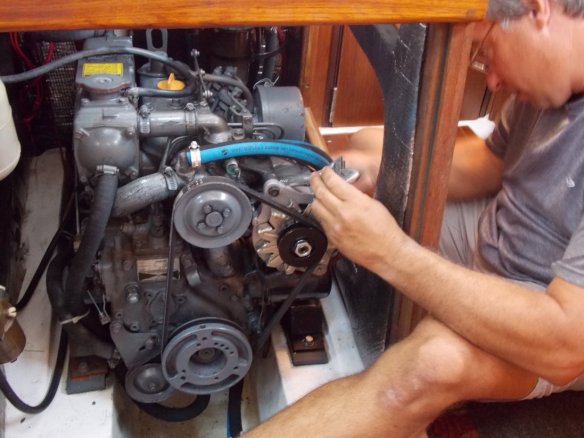 We were able to motor at 7 knots and made it to Government Cut in Miami at 2:30pm.  We navigated the cut and out into Biscayne Bay then south to No Name Harbor where we anchored for the night.  We set the anchor, cut the motor and manatees started surfacing off the bow of our boat.  This is the closest we have ever see them and you could hear the big breaths they take, truly a magestic moment.

As we were motoring through the harbor to select a spot to anchor, some kids were waving from the back of their boat.  After we finished putting things away on the boat and making sure our anchor was holding, a dinghy motored over with the kids and their dad to say hello.  We arranged to meet them on shore in 15 minutes.

We took a walk along the shore with the O’Sheill’s, letting the kids run off some steam, then headed back to our boat where the kids played a game of Clue while the parents kicked back in the cockpit.  The kids laughter coming up from the cabin was infectious.  They too are taking some time sailing their 37′ Islander with their kids to the Bahamas because as Candi puts it, “Life is short.  I want to show my children that life is to be lived everyday.   I hope it teaches them that fear is nothing more than a 4 letter word, and there is nothing wrong with watching a sunset instead of a television”.  Well said Candi!

The next day we explored for part of the day with the O’Sheill’s, touring a lighthouse, walking through the woods, swimming at the beach, cracking open a coconut and watching the local raccoons.

The weather for the following 2 days was forecasted for winds from the north at 10-15 knots.  We decided to head back to Fort Lauderdale the next morning.

We pulled up the anchor just after dawn and headed out around the southern tip of Key Biscayne and up the coast instead of going back up through Government Cut.  The winds were light and continued to pick up throughout the day.  When the winds reached 10 knots we hoisted the sails and beat to windward for a while.  Making headway against the north wind was slow and the winds kept picking up so we again decided to motor since we had a long day ahead of us.  We were glad we did as we were not able to make as good of time as we made on the way down.

The boys love the big waves and as they put it, they ‘defy gravity’ in the v-berth.  When a big wave comes along and they are in the v-berth, it sends them airborne which is great fun in their book.  Every now and then we make them come back in the cockpit to make sure they are not getting seasick. 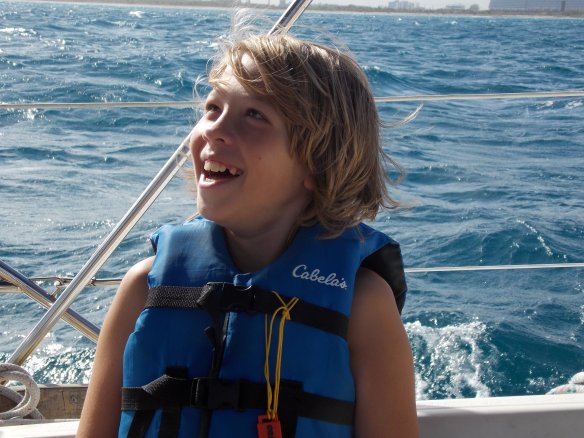 Logan enjoying the waves on the way back to Fort Lauderdale from Biscayne Bay.

Mark put out a line on the fishing pole after we were underway and while I was at the helm in some pretty good swells, I heard a zinging sound coming from behind me.  It was a fish on the line.  Everyone took turns reeling in our first tuna.  Gaffing it and bringing a fish on board a sailboat in swells was a bit of a challenge to say the least but we had fish for dinner. 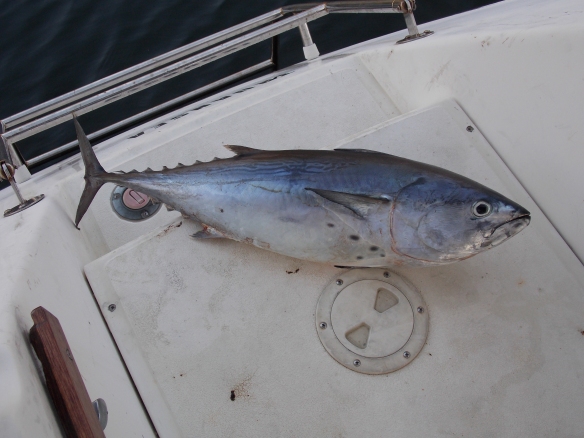 Little tunny we caught on the way back to Fort Lauderdale gave a good fight!

Emergency communications was one concern we had not yet addressed until a friend introduced us to Andy Cool, the owner of Explorer Satellite Communications. Andy gave us a great deal on one of his SAT phones.  We tested the phone on the way back from Miami and programmed in several emergency contacts and the Coast Guard’s number into the phone.  It will be a great peace of mind to have two way communication via satellite if the need should ever arise.

Testing out the Immarsat, IsatPhone Pro we picked up from Andy Cool at Explorer Satellite Communications.

We were all happy to see the 4 smokestacks at Fort Lauderdale in the distance at 1pm.  By the time we made it to Port Everglades and back to our slip it was 3pm.  It was a great shakedown cruise with a few more items added to the list to complete before our crossing.

We enjoyed fresh tuna for dinner.  Some we made on the grill and the rest we added to a jumbalaya mix complements of our friend Kurt.  Thanks for sending the Slap Ya Mamma mixes Kurt!