Was all of our gear for the next year able to fit in our car?  Yes, it all fit – barely.  We did not have to leave anything behind, but we do not have room for one more thing.  All of you that wanted to stow away on the trip with us, sorry, but there was not one more foot of space left in the car, on top of the car, or on the back of the car.  We’re a cross between pioneers and the Beverly Hillbillies.

Vehicle packed with all our belongings for the next year.

Originally Saturday, September 1, 2012 was to be our departure date but our good friends, The Reynold’s family, invited us to go on a river rafting trip near Idaho Falls.  Passing up a chance for an outdoor trip is not our style and Idaho Falls in on the way to Florida, so we decided to change plans to leave a day earlier, starting our adventure with three days of rafting on the Snake River.  We slept less and moved faster to meet the new deadline!

We have heard that starting a voyage on a Friday is bad luck so we warded off that omen by heading out of town Thursday morning to Bonneville Point, the site where Boise received its name, to do some home schooling and declared it the official start of our trip.  We were back to our house by noon that day to continue packing.  Do we really own this much stuff?!!

08/31/2012  Packing the last of our house and vehicle was a little crazy as we got down to the wire Friday morning.  All was going pretty much according to plan until Mark decided he needed to have the oil in the Subaru changed and fill it up with ‘good gas’ before parking it for the year.  Mark called me from the oil change shop where the Subaru decided to die.  Guess it knew it was being put out to pasture for the next year and was not happy about it.  Literally, it is being parked in the neighbor’s horse pasture.  They gave the battery a charge and it sputtered along until Mark was backing it into the pasture where it died again.  We’ll deal with that when we return next year.

The Subaru begrudgingly being left in our neighbors horse pasture. Thanks Rockie!

We shoved the last boxes (computer and cleaning supplies) into our storage unit, relocated our sleeping pads and bags from the family room floor to the top of the SUV, lashed down the last of our gear and met our friends at the 1pm departure time.

Before we lost cell phone reception heading east out of Boise, I was making last minute phone calls to the insurance company, credit card companies, property management company, etc.  I finished making the last of the arrangements with a few miles to spare.   We then put our phones and all other electronic devices away and did not use them for the next three days.  What a great way to decompress.  Miles traveled 320, to rafting near Idaho Falls.

Mark, Logan & Cole on one of the rafts on the Snake River with Brian, Max, Owen & Cassie (dog) Reynolds. Katie-we missed you on this trip!

After 3 fun filled days on the Snake River rafting trip, we headed to the King Tut exhibit at the museum in Twin Falls.  Cole has been into studying the pyramids for a few years and he was able to teach us as we went through the museum. 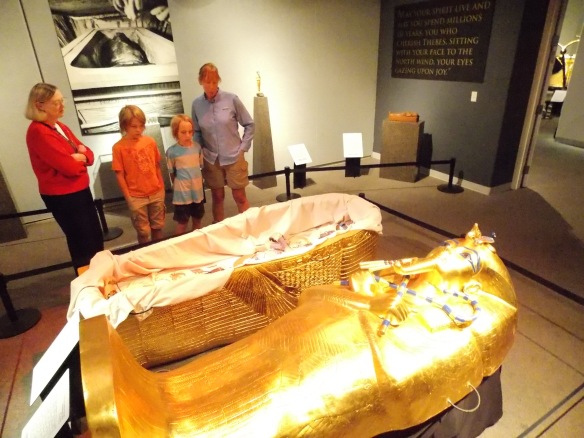 There was some great Idaho history in the museum as well.  Logan had made a replica of this same keel boat at home last year for a school project, although his was a smaller scale. 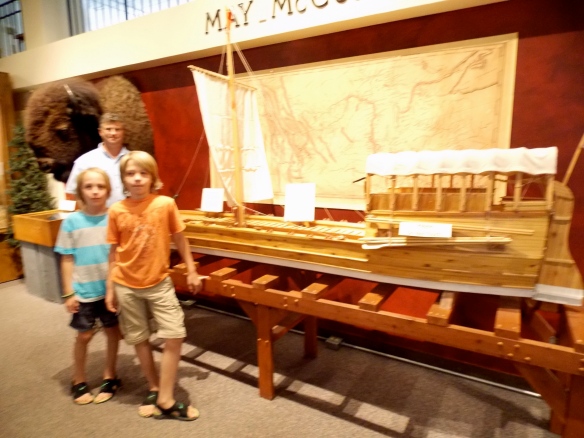 Logan made a smaller replica of this Louis & Clark keel boat as a school project last year in Mrs. Tacke’s 4th grade class.

Next we opted to head up toward Jackson, camping overnight in Victor, Idaho just before the Wyoming border.  Of course, we stopped at lots of interpretive signs along the way.  We always do this on our journeys, but since we are homeschooling this year, they have taken on more significance.  We all used to groan when Mark pulled over at an interpretive sign, but we are finding we enjoy them now.  Everyone takes turns reading them out loud and we discuss the relevance to the history we have been studying and learned along the way.  Miles traveled 122.

Fish and game releasing fish into a lake.

The following morning we went to Jackson, WY then headed down 191 to Interstate 80.  The scenery is as beautiful as mountain scenery gets.  On the way down 191, in Pinedale, WY  we stopped at The Mountain Man Museum.  It was well worth the stop.  Logan taught us a great deal here thanks to all the Idaho history and history of the west he learned last year in Mrs. Tacke’s class at The Village Charter School in Boise.  We traveled east on I-80 with the wind howling at 35+mph.  Our tent probably would have been shredded in the wind so we opted for a hotel in Rawlins, WY for the night.  Miles traveled 320. 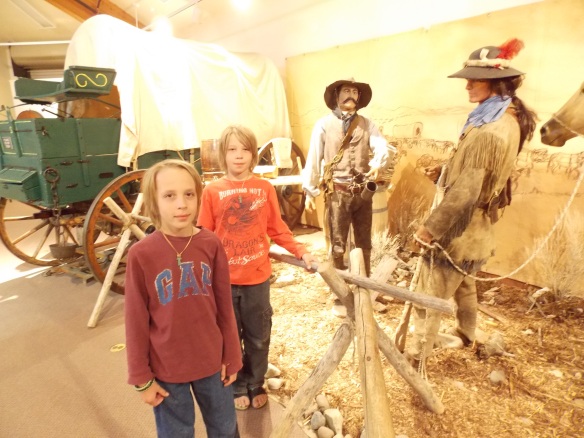 The next morning we stopped at the University in Laramie, WY.  The Geology Museum was closed for renovation; however, we were able to get a tour of the engineering building where we visited a machine shop and several labs where engineering experiments were in progress.

After lunch in the car we continued on and stopped at Vedauwoo Recreation Area in Medicine Bow National Forest.  Very cool rock formations here.  We could have spent all day hiking and exploring. 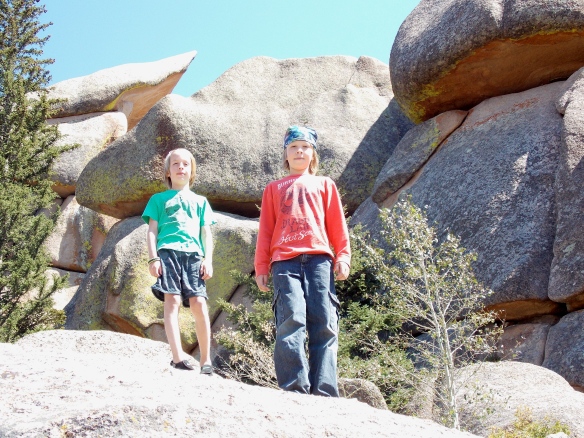 The afternoon took us into Nebraska where we stopped for an elective class in wilderness survival.  The west side of Nebraska has Yucca plants can be made into a needle and thread.  Cole bit a circle about ½” down around the spiky, needle top, then peeled ‘threads’ off.  Eventually you end up with 1 thread attached to the needle top which you can use to repair or sew clothes.  Camp for the night was at a peaceful reservoir outside of North Platte, NE.  Miles traveled 400.

Making a needle and thread from a yucca plant.

We started out just after dawn the next day and stopped in Gothenburg, NE to see a pony express station.  We were greeted by a retired teacher who was engaging and enthusiastic.  Did you know the pony express only lasted 18 months, and that the youngest rider was just 11 years old!  We were all taken in by the storytelling.  We met a fascinating man there from Columbia who plans to travel the entire length of the Amazon River.  In the same town is a sod house museum where another volunteer drew us in with her knowledge and stories.  The late evening landed us at a hotel in Davenport, IA. Miles traveled 640. 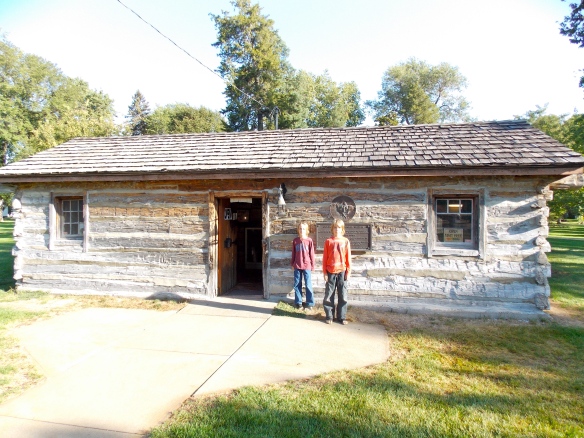 Cole in the sod house in Nebraska.

The next morning took us to Moline, Illinois to visit some of Mark’s relatives.  After lunch we took the kids to an awesome park to burn off some steam.  The afternoon was packed with a wealth of history to see; from a huge, paddle wheel steamer, the John Deere museum (there was a 6 legged walking robot there), the old fort at Rock Island arsenal and the Rock Island confederate cemetery. There was also a great display of weaponry including an atomic cannon at the Rock Island arsenal itself where we had to pass through an intimidating security check.  Thank you Stan, Judy and Eleanor for a fun filled day of history.  We drove to Kickapoo, IL to camp for the night.  Miles traveled 146. 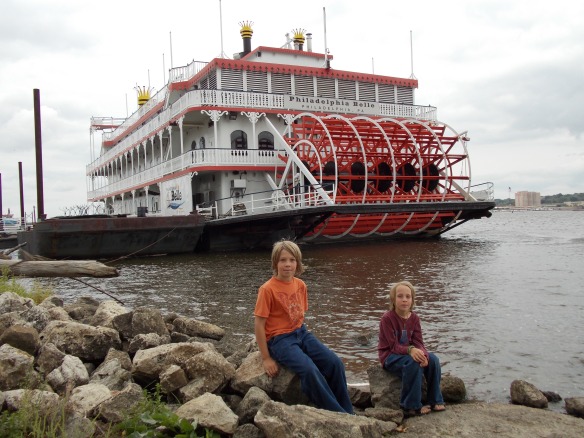 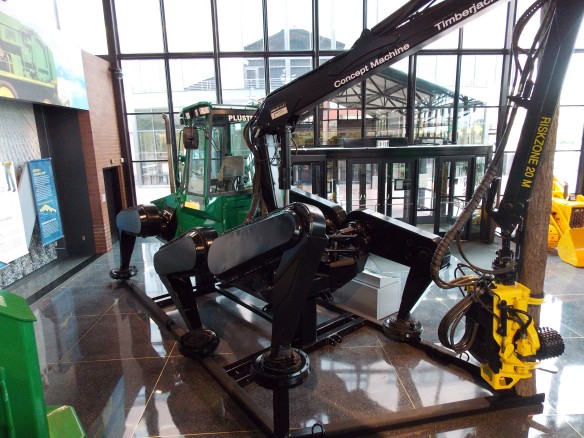 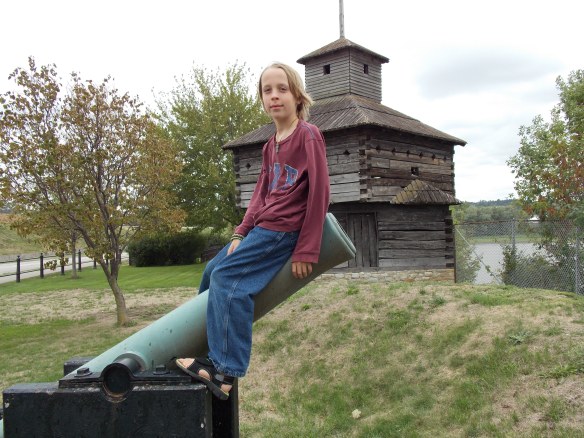 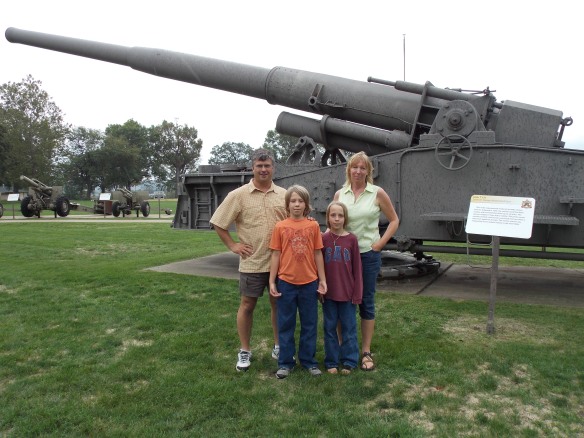 Today took us to Carmel, Indiana where we are staying with Mark’s Uncle Bob & Aunt Helen.  His cousin Lisa also came over to their house where we all enjoyed a fantastic dinner.  We enjoyed swimming in their pool, playing slot machines, pinball and playing pool.  Miles traveled 334.

Indianapolis has the largest children’s museum in the world, so that is where we headed today.  An amazing 5 1/2  hours later we had seen all we could see.  What a fantastic museum.  After the museum we enjoyed a swim in their pool and relaxing in the hot tub.  Lisa’s son Colton joined us for dinner where we went to Bub’s Burgers.  Colton impressed our boys by polishing off The Big Ugly, a 1 pound burger.  For his efforts, his picture was added to the Wall of Fame. 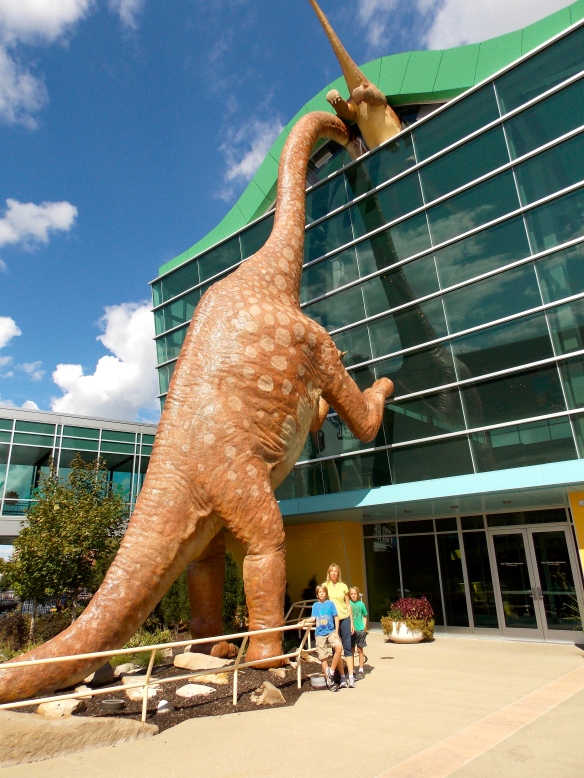 The Children’s Museum of Indianapolis. 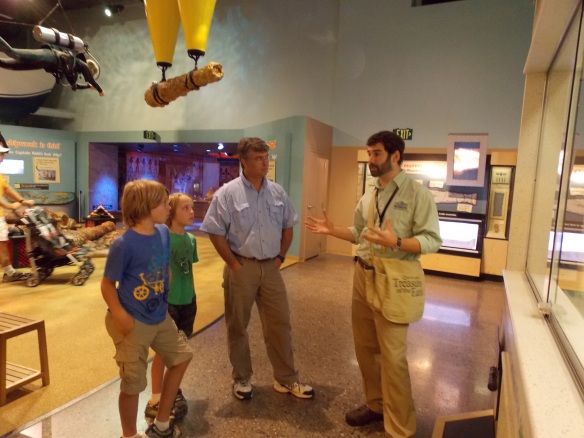 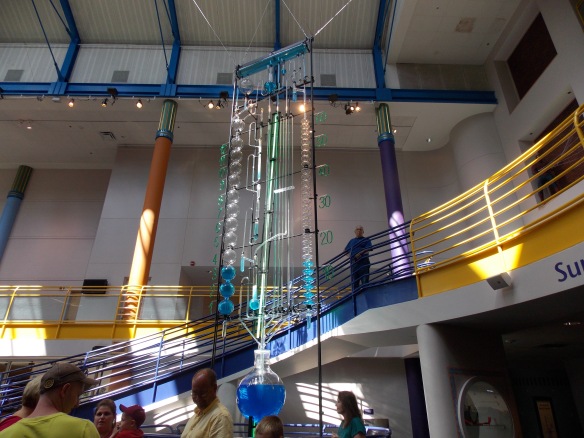 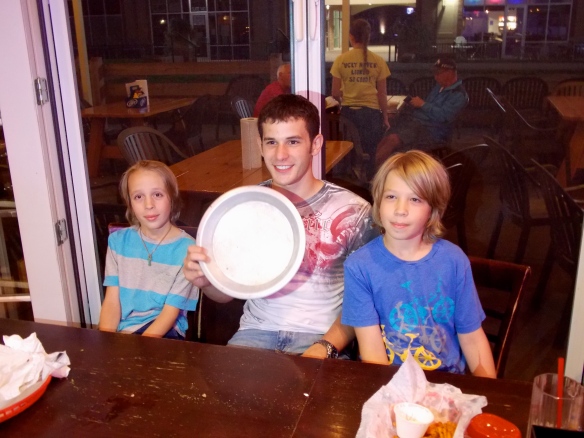 Cole, Colton and Logan. All that is left of Colton’s Big Ugly (1 pound burger) is an empty plate.

We said goodbye to Bob & Helen and took in the Hall of Fame Museum at the Indianapolis 500 track on the way out of town.  Now we know why it was called the brick yard and lots of other fascinating history of the track.  The night landed us at a campground near Mammoth Cave, Kentucky.  We were enthralled with the southern accent the Kentucky people have here.  Miles traveled 214.

We took the first tour of the morning at Mammoth Cave, the Historical Tour which is a 2 1/2 mile hike through the cave.

We learned that saltpeter was mined out of Mammoth Caves, made into gun powder and probably won the battle and freed us from Britain.  Of course, I had to ask if this was the same saltpeter given to sailors to suppress the male libido.  According to our guide, saltpeter was used as a food preservative and the translation was mixed up to be soft peter.  Evidently it does nothing about the libido.

Saltpeter mine in Mammoth Cave, Kentucky.

Where is the Truansea crew now?  Staying at one of Christine’s relatives in Franklin, Tennessee.  Miles traveled 116.

There is so much to learn, see and do as we make our way to Florida.  All of us have had fun and have been amazed at how much we have learned.  There is nothing like making history come alive.

While we have been on the road, one of my good friends, Paula, wrote a blog about our adventure.  It is truly a beautiful piece and you can read it on her site http://adesperatehorsewife.com/2012/08/31/bon-voyage-to-the-fiechters/

We love to hear from you!  Stay tuned as we make the last leg of our journey to Florida over the next 2-3 days.

4 thoughts on “On The Road: posted by Christine”